On March 30th,  the last day of the Georgia Legislative session,  the Senate voted 45 to 6 to pass SB 16 to further amend and expand Haliegh’s Hope Act (HB 1) signed by Gov. Deal April 16 2015. If signed by the Governor, this bill would add Tourette’s syndrome, Autism, Epidermolysis bullosa, Alzheimer’s disease, AIDs, Peripheral neuropathy and patients in Hospice care to the list of qualifiers currently covered under Georgia law while leaving the 5% limit on THC intact. SB 16 also includes a limited reciprocity for possession for out of state patients.

The bill’s passage caused jubilant reactions from the parents of Autistic children present at the session, several of whom were present and testified at committee hearings during this session.

While there are many people that consider this latest tweak to Georgia’s medical cannabis law a major victory, two of the most important conditions that were left out of the bill were Post Traumatic Stress Disorder (PTSD) and chronic pain. In every committee hearing on this matter over the past three years, Veterans and Veterans organizations have testified to the effectiveness of cannabis in the treatment of PTSD. That condition was struck out of the bill, despite the fact that even the Veterans Administration has formally recognized the potential benefit by commissioning this study.

A parade of Medical doctors and Research Scientist have also testified before the committees regarding the benefits of cannabis as a medicine to treat a wide variety of ailments, including chronic pain. In fact the statistics on reductions in opioid use in states with legal whole plant cannabis medications were presented, yet chronic pain was not in the bill that passed.  Even with all the testimony from credentialed witnesses and those with first hand experience with the medical benefits, there was plenty of opposing testimony from “experts” including the Prosecuting Attorney’s Council, The GBI, the Georgia Sheriffs Association, the Georgia Association of Chiefs of Police, religious organizations and Refer Madness lobbyists.

Every scientist and doctor that testified urged a much broader depth and scope for the medical cannabis laws so that the doctors would have the ability to treat their patients without restriction and so that the scientists could perform meaningful research. In the end, their testimony fell on mostly deaf ears while the concerns from the Judicial lobbyists over losing their revenue streams and the pleas from Law Enforcement over taking away their “low hanging fruit” arrest and civil asset forfeiture tools were heard loud and clear. During one hearing, Vernon Kennan, GBI Director (and registered lobbyist), opposed any attempt to legalize or decriminalize possession of any form of marijuana on the basis of it being against Federal Law. This basis for opposition falls somewhere between hypocrisy and irony as the Georgia Legislature defied Federal Law with Medicaid expansion and creating a State Obama Care exchange. So, they can’t deny that they regularly exercise nullification, even if it is only when it suits them or when directed by the some higher power.

You can watch the testimony for yourself on the Peachtree NORML YouTube Channel.

What is not known with any high degree of veracity is how much influence peddling occurred behind the scenes to keep Georgia’s medical cannabis law so severely limited in scope.  There were many rumors and innuendo as to why the Legislature is acting as obstructionists in the face of the will of the people (click here for a survey) one of which speculated about a deal reached with GW Pharmaceuticals granting exclusive distribution and research rights within the state. Other speculation was that concerns over campaign funding from those that would suffer losses should cannabis become legal has influenced the path and trajectory of the medical cannabis bills.

What is known for certain is that in the states that have truly legalized use and possession of cannabis, opioid pain medication use has dropped tremendously as have opioid overdose deaths. Click here to read a report in the Journal of the American Medical Association, or the NPR aritcle, or the USNEWS article. What is also known by parents using medical cannabis for their special needs children have reported miraculous results. Cancer patients have reported total remission from undertaking medical cannabis treatments. Veterans with PTSD have reported total alleviation of symptoms while using medical cannabis. There are myriad studies that report nothing but positive results with zero negative effects, and ZERO deaths (see studies here in alphabetical order by condition). The evidence for the effectiveness and the wide range of conditions that can be successfully treated continues to stack up, but the excuses to keep medical cannabis out of reach of potential patients are wearing very thin.

Now that this latest “improvement” to Georgia’s medical marijuana law has passed, and if the Governor signs it into law, what does it actually accomplish?  Mostly, it violates Article I, Section I, Paragraph X  of the Georgia Constitution by a “grant of special privileges or immunities” for a very small number of Georgians with the medical conditions that qualify them to possess a controlled substance that would be a felony for everyone else.  Georgia is still not a Medical Marijuana state. Georgia’s medical marijuana law does not legalize the production or sale of cannabis medications, it simply decriminalizes its possession by certain qualified individuals.

The 2017 Annual Report, from the advocacy group Americans for Safe Access, entitled “A Patient-Focused Analysis of the Patchwork of State Laws” evaluates the medical cannabis laws among the various states and ranks them using a matrix of criteria. Not surprisingly, Georgia scored an F with their medical cannabis legislation. Quoting from their report , “While the low-THC bill approved this year in Georgia does not allow for in-state production and distribution, the state deserves credit for both creating legal protections through a patient registry and creating a commission that is seriously looking at a comprehensive medical cannabis program for the state’s patients. The challenge facing Georgia is to take the knowledge gained this year and create a truly comprehensive, sustainable program. This program must provide for in-state production and distribution, lift the arbitrary requirements for CBD and THC, and expand the list of qualifying conditions.”

Haleigh’s Hope Act, along with this latest update is nothing more than an empty box. Georgia’s medical marijuana law only provides protection from prosecution for a patient that has one of the qualifying conditions, if they have obtained a recommendation from a Doctor (if they can find one willing to do so) and if they register with the Georgia Department of Health to obtain a medical card allowing them to possesses a small amount of low THC CBD oil. But, there is no provision in Georgia law that states how a patient might actually obtain such oil as importation into Georgia is still not legal, which begs the question of how the low THC CBD oil is showing up in the state. 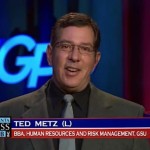